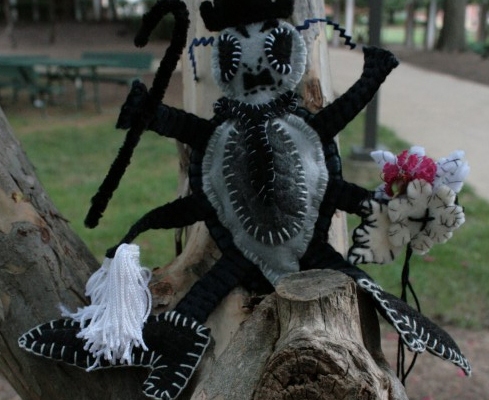 In bursts. With other people. Of character. In my body.

I’m a fiber artist. I sew plushies and crochet and embroider and needle felt and just about anything else. In 2012, after we graduated, Susan Falcon suggested I sew plushies as gifts for my committee. First, I sewed a Milquetoast for Michael as a going-away present. I made it in the style of Charlie Chaplin’s Little Tramp, the major subject of Michael’s work. And when I gave it to Michael, this little felt Milquetoast had a life. Milquetoast in Michael’s hands. Milquetoast in a Crepe Myrtle. I wrote three poems that day. And since sewing five more Milquetoasts (which I still have because Introversion), I’ve been planning to sew the rest of the characters in Theater of Parts. I have a sketchbook full of plans for plushies and embroidery hoops. Now that I’m working on the book again, I plan to sew these this summer. As soon as this semester ends, in fact. Sewing is meditative, and so is revision. So each of these characters (and their conflicts) will get some time and intention, and then I will finally figure out who gets to be satisfied, and who remains frustrated. And it will be freaking cool to have them there with me when I write.

Thanks for reading!
.
I’m tagging two dear friends who are great models for me–of continuing to write and send out work even when life gets to be full of other things in the way. Check them out! Their posts will go up next week, and they’ll each tag two more folks.
.
Kathy Goodkin lives in Denver, where she co-teaches poetry workshops in a correctional facility and directs writing center and tutoring services at Regis University. Her poems have appeared or are forthcoming in Denver Quarterly, RHINO, Redivider, and elsewhere.
.
Sarah Ann Winn is the 2013-2014 Completion Fellow at George Mason University, where she just won the Virginia Downs Poetry Prize. Currently, she teaches poetry in the public schools through a Sally Merton Fellowship. Her poems have appeared or are forthcoming in Great Weather for Media, Ilanot Review, Two Thirds North, and 111o, among others.
Note: these are not affiliate links.

I read a lot of blogs. I figure, if I’m not making something, I should be reading about making something. Sometimes one leads to the other, as was the case when I was lying in bed reading and I came across Mr. X Stitch’s “Tiny Things” swap recap (part 1, part 2) and announcement for the “Blinded by Science” swap. I got out of bed, revamped my plushies Flickr account, and signed up. I’ve been hungry for community, for collaboration, and for inspiration, and this swap provided all of these wonderful art-making things.

I’ll probably post another links round-up when all of the swap pieces have been posted and the swap round-up has gone up on Mr. X Stitch. I’m so excited about the work so far, and I can’t wait to see the rest of the pieces!

My fruit bat hoop for xsilverdaisyx